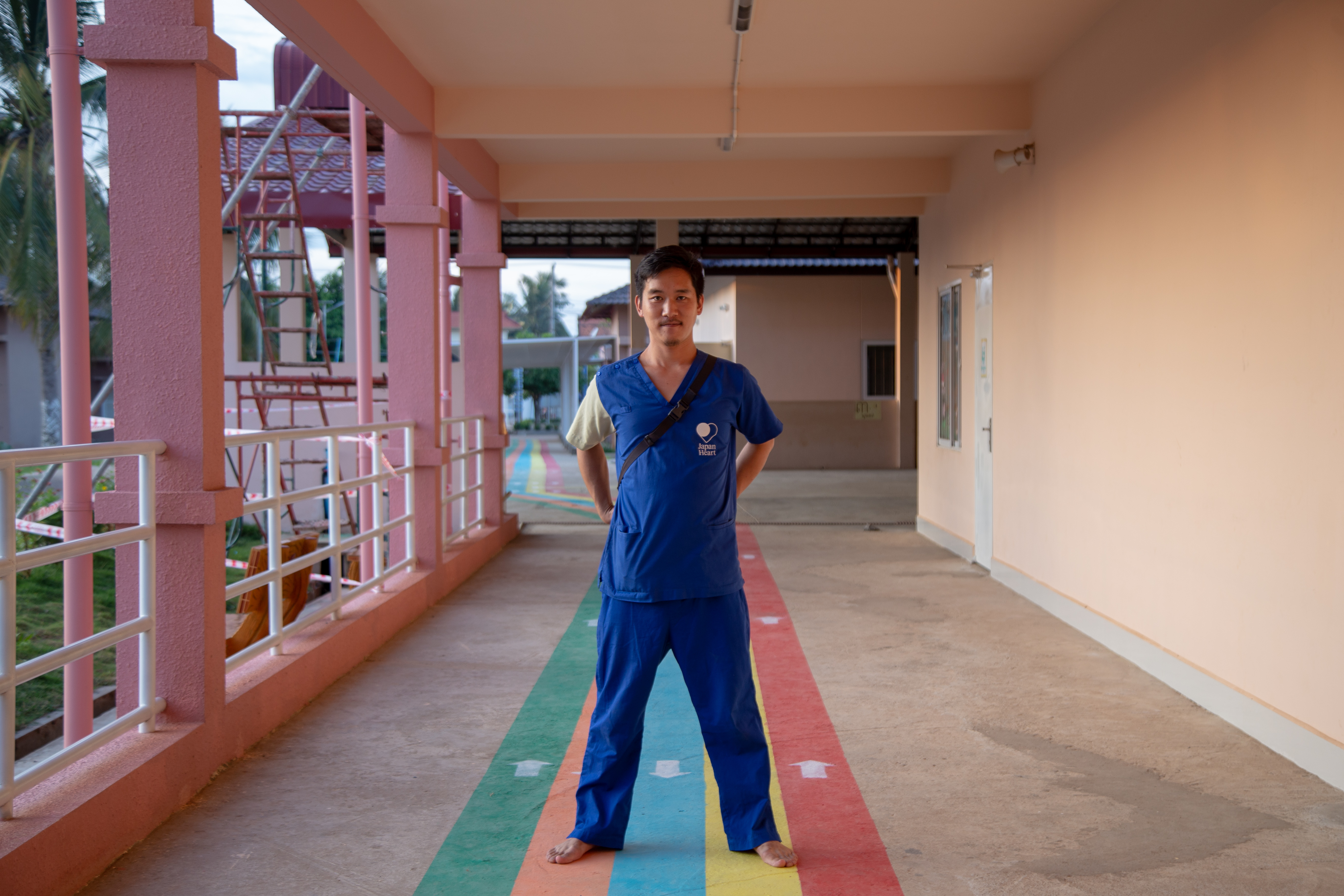 WHAT ARE YOU DOING IN CAMBODIA AND WHY?

I participate in a hospital management project as a non-medical person for Japan Heart Cambodia, a medical NGO, in the suburbs of Phnom Penh in order to deliver medical care to places where medical care does not reach. Basically I’m doing everything except medical. In Cambodia, where the infrastructure is not good, I am working hard to say in a word, from managing water, electricity, and other things… to managing the labor of staff.

WHAT DO YOU LOVE?

Start things and projects from zero.
I really enjoy the process of thinking about new projects and building relationships with local people and building small things.

WHAT ARE YOU GOOD AT (DO YOU THINK) ?

Making Cambodians laugh.
I am trying to work as a bridge between Cambodian and Japanese.

WHAT CHANGE DO YOU MOST LOVE TO CREATE IN THE WORLD?

I want to change the concept of “developing countries”.
I think that developing countries are categorized as Supported side and Japan are as Supporting side. When I was working at a previous NGO, the former NGO representative gave me a chance to study because I didn’t know real Cambodia. He encouraged me to “study more locally”, and on that occasion I found a pretty rural tenement house in Siem Reap by myself and started living as a poor foreigner there. I took a bath every day in the well on which “UNICEF” was written, washed laundry, and the neighbors point out that there were not enough detergent… I realized once again that I was a person who really couldn’t even do my own thing.

The first person who spoke to me who didn’t understand the language was the family who lived next door.  “Eat together.” This was a word that changed my life.
Dad and mom, a boy in the lower grades of elementary school, a girl in kindergarten, and a strange foreigner with a mustache. I think it was a pretty strange sight.

Dad was selling drinking water and went out to the city early in the morning with a tank full of water on a truck with a cargo bed behind the bike. I also helped selling water by riding a motorcycle for the benefit of three meals a day, and I could know what Cambodia was like.

There are about 10 other people living in that tenement and they took me to snacks, took me to river for fishing at the end of work. When we heard that the neighbor was hospitalized, we all went to visit them, I had a really good time.
I couldn’t speak a lot of words and just smiled, but they just introduced me to other people as “their friend”, and I became to love everyone who interacts with me as a person every day without looking back. At that time, there was nothing I could do though.

And I started to work in Phnom Penh with a vow to be able to thank them, and I decided to work at my current workplace to get closer to what I wanted to be.
At one point, when I finished a part of my job, I went to see the family again.

A nostalgic sight. An unchanging tenement. But the people who lived have changed a lot. The uncle who used to invite me to drink every day was already dead. The police officer who used to do well on me has already moved to the new house. All the family who were watering together with me and I thought of them as a family at my convenience, told neighbors to go to Thailand for earning money like escaping from debts.

I don’t think I have ever thought I can’t give what I got back to another person for a lifetime. I felt the meaning of the term “Ichi-go Ichi-e”, once-in-a-lifetime once again and I am still in Cambodia to become a person who can return what they have given to me. It becomes long, but because of this, I want to do everything I can do now as a person.

WHAT DO PEOPLE VALUE AND PAY YOU FOR?

Approaching to Cambodian culture.
Being able to think about how the local people think and why they do so.

I have been “teaching” without understanding their background so far, but, after that some local staffs often told me “I couldn’t say this because you were angry, but this was actually like that…]. Problems that do not occur between Japanese people often happen here because we do not speak each other’s native language.

That’s why I found my stance not to get angry, but to sit together as much as possible. And having fun with the local staff and always trying to keep in mind that they can work even if I am gone.

WHAT IS THE MOST STRUGGLING THING IN YOUR LIFE RIGHT NOW?

I still pass by without realizing the gentleness of people. As I set up the antenna, I feel a lot of love, care and kindness from many people every day, but I still can’t get there. I struggle with pretending not to notice the true gentleness of people with excuses that I get tired of having an antenna.