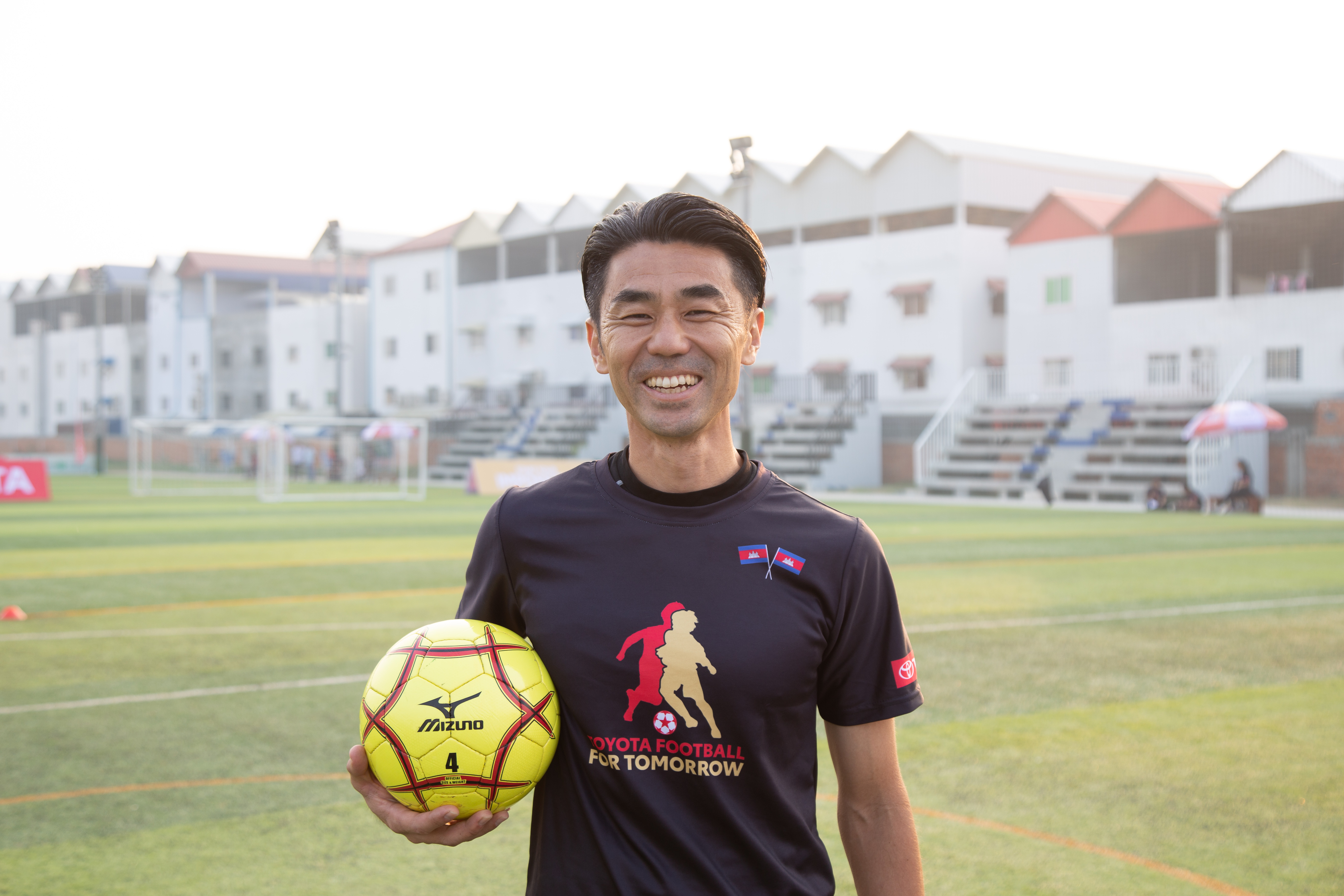 I’m from Manila, Philippines. My father used to work in Philippines for a trading company 44 years ago, and I was born at that time. After that, we went back to Japan and lived for 5 years and went to Singapore. So, I am living in Singapore for more than 20 years in total so far.

WHAT ARE YOU DOING AND WHY?

I am doing football. In other words, I am spreading and expanding the greatness or positiveness of football as much as possible. That’s my job and what I am thinking everyday.

I started playing football since when I was in a kindergarten because my father put me into a football club, called Mitsubishi Yowa. I actually don’t remember the old days clearly, but I was a kid like didn’t go home even after my own practice and watched long time elder students practicing at the football field. So sometimes the coach couldn’t stand looking at me and invited me to practice with elder students. I was hooked on football somehow. That’s a trigger for me.

I was playing in that football club till 9, and went to Singapore. And I was playing in Japanese team and Australian team till 14 in Singapore. After that, I went back to Japan and joined football club at Waseda Jitsugyou High School. But the level of that club was so high that I couldn’t be a regular member nor even in the bench. I was always at the stand. After graduation, I went to Waseda University and of course I joined football club but I couldn’t play even one game in the official league. I was always at the stand for 4 years.

After graduation, most of the people would find employment at some company in Japan, right? But I really wanted to play football even after graduation. I was actually got a job at a Stock Company. But I heard there was a professional football league in Singapore. So, I went to the company that gave me a position, met with a person in charge at HR department, and I declined formally with my hair dyed gold. I went to Singapore, got some trial and finally I could be a professional football player in Singapore.

I was not in a good relationship with my parents, but they always said to me “Listen carefully to yourself”.

I was not able to play football even one official game through High School to University. I was not a good player at all. But I was listening to myself. So I chose that way. I didn’t care about confidence nor fear. I was just thinking like “This is what I love to do, so I have to do. Get a goal at next match. Play even one minute longer at next match”. There was no choice in myself.

After getting a year contract with a professional team, I got injured just 6 month later. I had to go back to Japan and I was like “Oh man. Is my dream just finishing like this?” I did rehabilitation for 6 months and joined an IT venture company and worked for 2.5 years with doing rehabilitation. While running on route 8 in Tokyo at midnight, something hit on my mind. “I want to challenge again this year!” so I quit that job and kept training for 6 months and went back to Singapore again to get trail.

This time, I played for 3 years, but the salary was so little that I had to work for part time job. Fortunately, a president of one Japanese company hired me as a part time worker in his company, and I could keep playing football. Working from morning till 3-4 pm and going to play football after that. I am still appreciating for him and his company.

I was becoming 30 at that time, and started wondering which way to go. Then the next opportunity in “Ghana” was coming. When I was playing in the 1st team in Singapore, there was a player from Ghana. He was so skillful that he played in Ghana national team and among all, he was a great person. So we contacted each other as a foreigner in Singapore, as a player struggling in a same league, and as a friend. After wondering for a while, he offered me to go to his country. He connected me to the team in Ghana and I could get a contract there. The league was delayed 6 months and my passport was kept by team, so there were a lot of troubles in Ghana but the life in Ghana for 7 months were absolutely awesome. It is a great experience in my life. In fact I was about to retire from professional football player life, but I still wanted to play, and there were a lot of opportunity through internet, so I went to Australia, got trial and got contract from one team in Sydney state league when I was 31.

After that, I still wanted to play football so I searched, and got trial at Bolivia. The try out period was 2-3 weeks and got an offer from a team in 2nd division. But, due to the low salary, I had to work again. Hmm, 32 years old and this offer… I decided to retire from the competitive professional football player life at that time, and went back to Singapore.

Going back to Singapore, meeting with old friends, and we decided to start a company working for football at 2009.

Why did I keep challenging football so long?

Football is so natural for me. Actually, if I compared with other players in high school or university, I might have quit, but I didn’t compare. I just focused on myself, I didn’t stop playing football even after injury unlike others. I didn’t give up till I felt enough. Now, I can’t be a competitive player but I am still challenging with football.

I do what I love that’s the reason I keep challenging with football.

WHAT IS YOUR “SWEETNESS” IN LIFE?

When the people smile with football. Especially when, Kids, adults, players, or supporters, smile in the place of football which I provide if possible, I feel happiness.

One kid I trained 7 years ago, got a job at one company. I met him doing internship at Myanmar for the 1st time in 7 years. And he said at dinner, “Saito coach, I am so happy to meet you, and the 2 years playing football at Singapore in which you trained me is the best in my football career” that is my joyful moment recently.

And I left GFA Singapore in December, 2019 after 10 years. I said good bye to the friends in Singapore face to face, but as you can imagine, I couldn’t say good bye to everybody face to face in the world. But, I got a lot of messages from my students all over the world. Like “If I hadn’t joined GFA and got trained by you, I wouldn’t be who I am now.” I got sentimental these days, actually.

WHAT IS YOUR “ANGER=SALTY/SOUR” IN LIFE?

Generally speaking, I feel anger with Betrayer, or impolite people. But, I feel negative feelings are waste of time, so now I am trying to change my mind since 5 years ago. “I will take action instead of complaining or using time for negative feelings”. You know, I was an amateur manager 10 years ago, I survived difficult situations somehow for the first 2-3 years with learning a lot of things through works. I felt the job of manager is like firefighter. It’s like extinguishing the fire here and there. I have to extinguish the fire and move forward, so I can’t stop one by one.

WHAT IS YOUR “GRIEF=BITTER” IN LIFE?

I sometimes wonder “Am I making my parents happy who gave birth to me?”
I didn’t eat together during my days in high school and university. If they eat in the dining room, I didn’t go to the room. I started eating after they get out from the room. Maybe I was at a rebellious age. After graduation from university, we got close to each other.

My parents cheered me all the time without saying anything though they knew I couldn’t play in official match even one in university. And they said nothing when I declined the job offer and suddenly went to Singapore for trial of professional football team. When I got the first contract as a professional player, the team gave me a room. But it was so small, dirty place and there were mice and cockroaches. My mother came to see me there all the way from Japan. I was so honored to show my room which I got by myself to my mother at that time. When she came into my room, she sat down in the middle of the room and started crying. I didn’t understand the meaning of her cry, at that time. Whenever I moved to other countries, she came to see me. Now, we are calling each other when I take flight. “Tai, thak you for calling. Eat rice and good luck” she always says that.

They let me try everything what I wanted to do freely, even though I made a lot of troubles, and concerns for them. I sometimes wonder “are they happy with giving birth to me?” and I now want to try harder for making them happy.

WHAT IS YOUR “UMAMI”=”IKIGAI” IN LIFE?