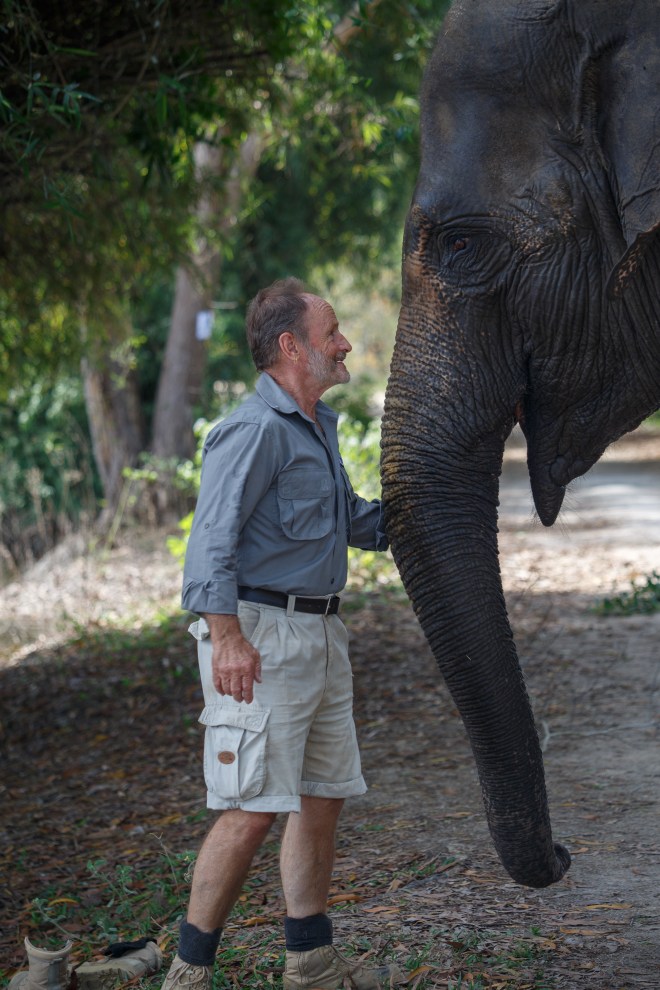 I have worked with wild animals and for their conservation all my working life. This is my Ikigai, my reason to be.

I have worked in parks in Africa, India and for a short time in Peru. My last job in UK, before I came to Cambodia, was at an Animal Park in Kent, where we were allowed to create relationships with our animals. I was overall Head Keeper and worked with the carnivores, building relationships with my tigers, of which we had many, all living in large natural enclosures.

When one of my colleagues was killed by a large Siberian tiger in 1994 I was not allowed to enter the tiger enclosures and continue my friendship with them. I could not obey these instructions and was ultimately and regretfully asked to resign my position by the Park management.

I went on to take a Master’s Degree in Conservation Biology at Kent University and was then accepted by Wildlife Alliance in Cambodia, where we have implemented a unique program to crack down on the illegal wildlife trade and have also implemented ground breaking wildlife care and release programs for endangered species.

Because of our selfishness and self-importance we totally underestimate the intelligence and sensitivities of our fellow creatures, which get a very bad deal from Humans from every perspective.

My Ikigai, my deepest feelings, cannot be more clearly stated than in this poem, written after my departure from the Animal Park in Kent, as I searched for useful work for the benefit of wild animals.

“MY WORD WITH GOD”

And now as I aspire to stroll about Your Globe once more,
Deliberate and slow, picked myself back up off the floor,

Now I’ve lost so much of value for what seems a pointless plan,
I now hope that I’ve become an infinitely wiser man.

I’ve been punished for a crime I saw no choice but to commit,
The penalty severe, no other option but submit,

And now I know although my life may never be the same,
And also know that some might say I’ve just myself to blame,

I’m clear, despite events, there’s not a chance I’ll ever change
As I travel down a path that is to me a little strange.

I still rage at the injustice dealt lives other than my own,
My fury aimed at deeds I know the gods will not condone.

And now finally I see that there’s another side to pain,
And hope You’ll not request I go through similar again,

When next I seek assistance, and before You heed my plea,
I ask You’ll care for other beings needing help far more than me.

Now that You’ve created man, Your vagabond, Your sick buffoon,
Only creature in the Universe so sadly out of tune.

Increasing his own numbers, desecrating all he needs,
The solution to his problems – create more mouths he cannot feed.

Now his thoughtless self-obsession is so total and complete,
Matched only by his all-consuming cruelty and conceit,

As he causes constant mayhem, yet still asks for a reprieve –
Not a coat of many colours, his own straight-jacket he weaves –

As he prepares one last assault upon this green and vibrant World,
With his hands around his weapons of destruction tightly curled….

From every creature on the land and in the air or in the seas,
From antelope and anteater to wasps and bumble bees,

From moth and fragile butterfly to porpoises and whales,
From majestic golden eagles to partridges and quails,

The next time that you hear his cries, to “Save him if You can!”
Please tend these other creatures before You next look after man.

Now I’m re-entering this World from an eternity of rain,
And now factors of importance come to focus once again,

And now we’re absolutely certain we’re the only ones to feel,
So determined that our self-inflicted scratches You should heal,

And now our ears no longer listen as through sightless orbs we peer
Along a road so straight and true, down which we’re far too blind to steer,

I ask, “Is man the potentate or just some crazy loon?”
And am I but one more as I emerge from my cocoon?

From every fin and every feather to each tiny tuft of fur,
From every terrifying roar to soft contented purr,

From gently waving tentacle to shiny, silver scale,
From every iridescent wing to long prehensile tail,

From fang and bill and mandible to canine tooth and claw,
From trunk, and horn to cloven hoof or softly padding paw,

When next you hear the pleas, both from myself and other men,
Before You see to our abrasions ….. Care for them.